Mokairau Herefords is a commercially farmed Hereford stud situated on coastal country about 40kms north of Gisborne. Peter and Christine Reeves have been joined in the family farming business by son’s Jon, Sam and son-in-law Nick Land.

The business includes four properties, which trade and are run as one entity known as Mokairau Farms Ltd. The business spans a total of 2910ha. The home block, Mokairau is 990ha, the neighbouring Mangaone is 520ha and is managed by Nick,  Jon farms the 700ha Waihapua property a 20 minute drive away and Sam farms 850ha Mangaroa a 30 minute drive. 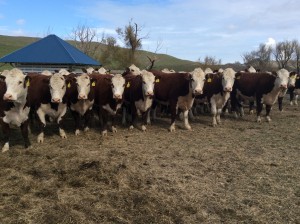 Mokairau farms graze 26,000su. This comprises of 70% cattle, 25% sheep and 5% deer. The country is a mix of flat, rolling and hill country and its all pastoral land with no areas needing to be retired. Rainfall is between 1400-1500mm annually.

The business also leases out land on a per hectare basis for commercially grown sweetcorn or squash. Also added to the mix is 800 head of dairy graziers which provides a steady income stream and they finish about 800 heifers and steers annually.

The Waihapua and Mangaroa blocks are run as breeding units with the young stock finished on Mokairau and Mangaone. While Mokairau has the capacity for finishing stock, it is also a breeding unit.

The Reeves mate 900 breeding beef cows of which 320 are registered Hereford cows. They run a Romney/Poll Dorset flock of 8500 ewes and target early season lambs. They also run about 350 hinds producing velveting stags and venison.

The Hereford breed is where their passion is – and it’s a passion that spans generations. The Mokairau Hereford stud was established in 1954 by Peter’s father David after he purchased five cows from the Wilencote jubilee sale.

Peter and Christine take pride in their family farming business and focus on identifying opportunities for the family.

Most of their family currently live in the wider Gisborne region. Son Richard is a policeman in Tolaga Bay, Matthew has worked on the farm and is currently driving stock trucks in the South Island, Jon is managing the Waihapua property, daughter Sophie is married to Nick who manages the Mangaone block and Sam manages Mangaroa. Peter and Christine have ten grandchildren and Peter’s parents David and Joy are still actively interested in the farm and business.

When it comes to breeding Herefords, the Reeves family focusses on what their clients, hill country beef breeders, want. 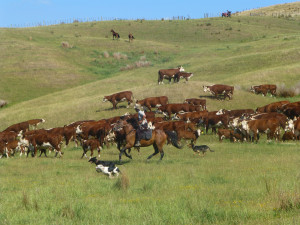 Their breeding philosophy has not changed since the stud was established and has stood the test of time. Their aim is to produce structurally sound functional bulls that will breed substance, be effective converters of grass to red meat, have a good temperament and high fertility. To aid eye appraisal evaluation, the use of breed plan and fertility data provides an objective measurement as a guide to commercially important traits, helping to select the right sires while improving our breeding programme.

Peter feels one of the most exciting opportunities and developments for beef farmers is SNP technology and DNA testing.

He said SNP testing is an exciting development, in that it will enhance the accuracy of estimated breeding values (EBVs) and has the potential to provide bull buyers and stud breeders with robust accuracy and confidence in parent verification.

The Reeves have been DNA/sire verification testing since 2006 and moved to SNP technology in 2012 so have collated an extensive database of information.

The Reeves are passionate and dedicated to farming with most of their off-farm interests being related to agriculture.

Peter is the past chairman of the TB Free Gisborne Committee and is a director of Gisborne holdings which operate the commercial assets of the Gisborne district council, which includes Tauwharepare Farms Ltd. and covers 11,250ha (6500ha effective) and winters 62,000su.

Christine does the administration for the farms and along with daughter Sophie and daughter-in-law Chloe help the boys at busy times on the farm.